Suite: Kirtan Soheila - Wisdom and Music for the 'Rest' of your Life 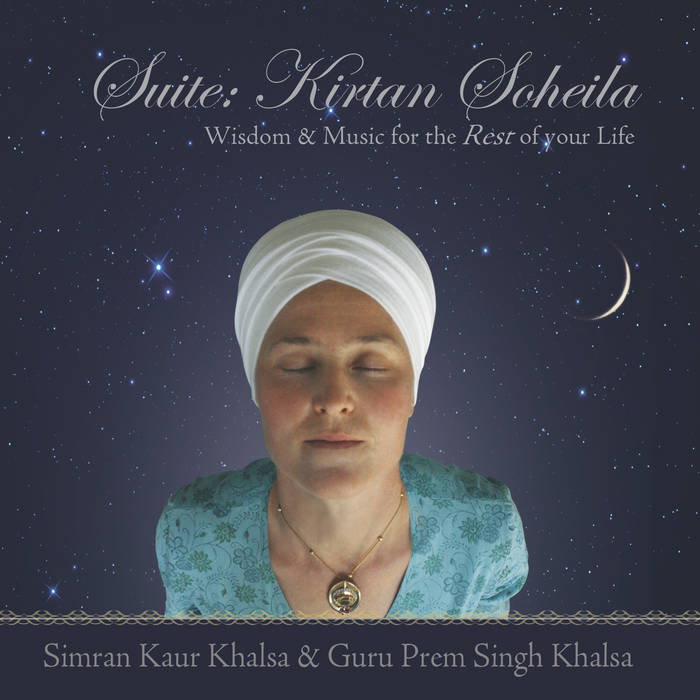 A Song of Peace - Kirtan Soheila
I am sitting with my wife, Simran Kaur, in a Chapel at the start of my sister-in-law, Karen's, funeral. While we wait for the service to begin, a new recording of Kirtan Soheila, the song of peace, is being played. If this was a Sikh funeral then Kirtan Soheila would be an essential part of the memorial and cremation, but this is in fact, an Orthodox Jewish funeral. Simran and I are the only Sikhs in attendance, so it seems curious that Kirtan Soheila would be playing. Was this some random event that the words of the Guru would be pervading in the chapel of the cemetery grounds? Actually, it was my brother Curt’s request that “the song” be played at his wife’s funeral. A week earlier, as Karen lay dying in the hospital, I offered the nearly finished recording of Kirtan Soheila to my brother Curt, thinking the words and music might bring him some comfort. I was bit surprised that after listening he wanted it played by Karen’s bedside. The Guru’s word’s seemed to touch my brother’s breaking heart. So, Kirtan Soheila played constantly in the critical care ward of the Long Beach Memorial Hospital. Karen and all who were present in her room were hearing the sweet voice of my wife Simran, through the small speakers near her hospital bed. It wasn’t long before Nurses, Doctors and even the Chaplin asked about the music. They did not know what this music was, and yet, they all wanted copies. I wish to share the story of the recording of Kirtan Soheila and the transformation it brought into the many lives it has touched.

This recording happened to be completed during Karen’s sickness, diagnosis and passing, but the genesis of the project began two years earlier. I believe from the start it was the Guru’s hand that guided this song of peace, from conception to completion.

In early November 2009 my daughter’s best friend, Guru Simran Kaur, passed away from a brain tumor, she was just fourteen years old. This was a very sad event and a profound challenge of faith for our community. For months during Guru Simran Kaur’s illness, a meditation was done nightly for her healing. I felt compelled to participate as often as possible in these nightly meditations, any excuse to visit Guru Ram Das Ashram is a blessing and I felt blessed to have been drawn to the Guru's house to meditate in the company of the holy. Though Guru Simran Kaur’s life ended and I felt a deep and poignant loss, these months of meditation and contemplation also felt like a blessing so that I might be able to give something back.

The seed of this project really began many years before when my wife was a small child. Simran Kaur was one of the first children born into the 3HO/Sikh Dharma lifestyle taught by Yogi Bhajan. Kirtan Soheila is the Bani (daily prayer) recited by Sikh's just before bedtime, as it offers protection, peaceful sleep and serenity. My father-in-law, Sat Jivan Singh, recited and sang Kirtan Soheila in English to his young daughter, nightly. Simran continued singing Kirtan Soheila through her school years in India. The first time I heard Kirtan Soheila sung in English, was on our honeymoon! From then through our twenty-one years of marriage, Kirtan Soheila was recited before bed. As our children were put to sleep Kirtan Soheila was sung. Even last summer, our thirteen-year-old son, SiriGuruDev Singh, would insist before sleeping, “Mataji, can you sing Kirtan Soheila?"

As a result of her Kirtan Soheila ‘Sadhana'(daily practice), Simran was destined to sing the lead vocal, she after all, truly knew it by ‘heart’. I, on the other hand had to listen much deeper to be able to compose, play, and arrange, what would become one of the more transformational experiences of my life. At this time I began writing the book, “Everyday Devotion - the Heart of Being”. This book was an opportunity to share my experiences with Sikh Dharma and Kundalini yoga, and how they have and continue to transform my life and was published in June 2011. During this same period I worked on the music for Kirtan Soheila. After Guru Simran Kaur’s death, I began playing more piano and guitar, my playing was improving and so was my song writing. This experience with death helped me to listen deeper. I began hearing melodies and arrangements that came from a new place within me. Initially, I thought a simple accompaniment of Simran Kaur singing and reciting would suffice, the Bani was calling for more, so I began with a blank page. The original words of poetry by Guru Nanak, Guru Ram Das and Guru Arjun Dev, are in Gurmukhi in Indian Raag, singing the English translation required a proper musical context. I decided that a western sounding classical arrangement best suited the translated words. I used some familiar melodies, but for the most part I listened for new ideas and arrangements to deliver the words of the Guru. Having heard my wife sing the Bani over so many years I could hear her sing inside me, that voice that sang to my children and myself many times before, as I listened, I began to hear arrangement ideas.
Once I began the recording process, I soon realized that I would need help with the arrangements and production process. I prayed for someone to appear with the skill and sensitivity to help me fulfill this project. That prayer was answered when I was introduced to Randy Emata. Randy’s playing and production skills were truly a Godsend. Together with the Guru’s guidance we were able to manifest the "Suite: Kirtan Soheila".

A story about the recording of Suite: Kirtan Soheila, and my experience of insomnia and the cure of Guru’s Bani, Kirtan Soheila and Kundalini Yoga.

The recording process went smoothly because I was blessed to hire skilled people that helped me realize my ideas. However, there was a very challenging period toward the end of the production process, for as once the recording began, I could think of little else, the arrangements and how things should sound. The recording project occupied most of my free mental space and there was a portion of the music that was not coming together!
With this part of the project not working, I was further challenged by my sister-in-laws illness, frequent visits to the hospital and struggling to deal with the mortality issues that were confronting my extended family. On top of this I had some painful dental work done. The irony was, while recording the music to help you sleep, I developed insomnia. It got so bad that I began taking medication to help me sleep, which did not work so well. It was a revelation to become aware my own issues with sleep and death. I used these challenges presented me as an opportunity to apply Kundalini Yoga technology to my circumstance. I began practicing the 'Kriya for Conquering Sleep', immediately I began to feel better, in part because I was doing something positive to help myself get to the cause of my problem. By the Guru's grace and with the help of a masterful Cellist, the final pieces came together and Suite: Kirtan Soheila was complete! The Kriya became a very important part of my night, and I started listening to Suite: Kirtan Soheila while I practiced the Kriya. Now, I could listen not as a composer, but as a devotee of the Guru’s wisdom. It has been over forty days since I began my evening practice and my sleep has greatly improved. I addition I no longer approach the sleep Kriya as my insomnia medicine, I now embrace this evening practice as a total joy that rewards me with sleep and rest. The sleep I receive allows me to wake up for morning Sadhana with greater enthusiasm. I am truly blessed.

Click here for the next blog where GuruPrem shares about the technology of Kirtan Soheila
www.spiritvoyage.com/blog/index.php/kirtan-soheila-facing-the-little-death/

If you like Suite: Kirtan Soheila - Wisdom and Music for the 'Rest' of your Life, you may also like:

Bandcamp Daily  your guide to the world of Bandcamp

Featured sounds from Fly Lo and Ahmed Idris, plus Mother Nature hops on to drop off new project